to be in love like this is almost hate. 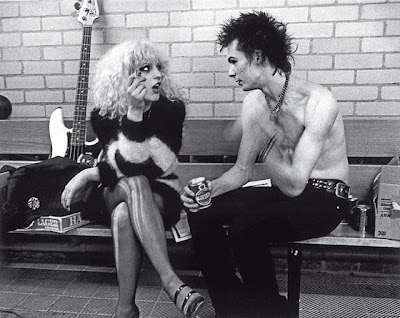 Nancy Spungen never wrote a song or played in a band in her life yet she has assumed a position in rock mythology that has made the the image of her tumbling peroxide hair and kohled eyes as immortal as Sid's and forever joined as punks most famous couple.
Mixed up kid, music lover, exotic dancer, prostitute, groupie, starf***er, drug addict and lastly girlfriend of Sid Vicious dead in the Chelsea Hotel New York. One view sees a manipulative siren - 'nauseous Nancy' - leading Sid Vicious to his death through drugs - 'A Titanic waiting for an iceberg to happen' said Johnny Rotten.
Another view sees a young disturbed 19 year old girl just following a dream in music, falling in love with another damage case and becoming a tragic doomed couple at odds with the world ending in premature violent death. A death and a life forgotten in the media frenzy as her partner and alleged killer, Sid, died soon after.
Nancy Spungen on her own was always destined to be a girl in the back of someone else's photograph. Sid Vicious and death gave her infamy. Who was the real Nancy? As usual the truth lies somewhere in the middle.
Posted by Giselle at 2:35 AM

nice one, i just made lots of some other new emo backgrounds to my blog
http://www.emo-backgrounds.info