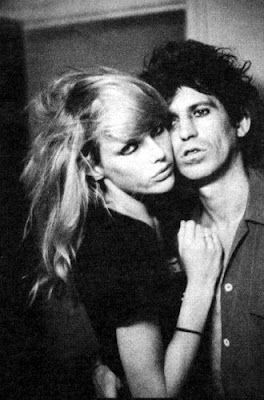 Patti Hansen and Keith Richards. The ultimate rock n roll couple. And a couple that can stand everything. Keith is know world wide and throughout time as the ultimate junkie and rocker. He, like Mick Jagger, was never uber attractive but oozed sex appeal like no other. A man who never backed down from a night out and never said no to ANYTHING passed his way, powder, crystle, liquid or plant. The man is possibly the only living human who could rack anthrax and get a tingle down his spine.
Then there's Patti Hansen his long suffering wife. "Discovered" at a Rolling Stones concert she was a model for Calvin Klein and Revlon. You'd got to admit but, standing next to the man you love and adore and watching gorgeous women throw themselves on him would make any girl nervous. And in saying that, instead of joining him in life in the fast lane, she became a born again Christian who attends bible study every week. An area Keith and she agree to disagree.
Sometimes the strength of women like Patti Hansen make you wonder.
Then sometimes you have to carve your own path. But take advice on the way.
Posted by Giselle at 3:40 AM